On Friday night, our Year 2-4 singing group and Mrs Pugh’s instrumental group represented Terang College at the Nexus Concert in the Civic Hall. Both groups did an incredible job performing, as did the students who performed in dancing groups, Liam King on bagpipes and Emily Fuge’s solo violin performance.

Special mention to the Year 2-4 singers who were incredibly resilient when their music wouldn’t play initially, and even sang Advance Australia Fair as an acapella alongside Mrs Mackinnon.

Well done to all involved. It was a successful night for our students. 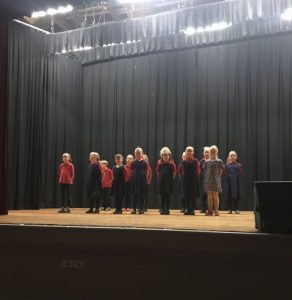