In the 7/8 STEM elective semester 1, students learned about 3D printing and designed a car using 3D printing software. Their design is sent to a 3D printer which gets printed out of PLA plastic. Once printed, students had to put their car together by adding wheels and making the car surface smooth. Additionally, each team had to make a portfolio which needed to include sketches of their car design, information about the design process and descriptions about the software they used.

We left at 6:15am, arriving at Quantum Victoria by 9:30am. The two teams were put into different workshops which they rotate through for the day. The workshops included time-trial races, Robotics and some coding. For the time trials, teams get to race their car 3 times down a 20 meter track, the quickest time from all 3 races are recorded.

Team 1 were first for the day to race their car. Jessica Moloney volunteered to be the “driver” of the car. Unfortunately, the car had some mechanical issues and was unable to make it down the track for any of the 3 trials. Which meant that no points are rewarded for the team.

Team 2 raced shortly afterwards. The team had 2 different cars they made for racing. Abbey Dixon was the “driver” for the team. Both cars went extremely well and recorded very fast times, close to 1 second per car. The students were very happy with their results.

At the end of the day, there was an awards ceremony, where results were collected and winners announced to advance on to the finals. As team 1 didn’t get down the track, they didn’t get any points for the racing, however they got top marks for their portfolio. Unfortunately it wasn’t enough to make it through. Team 2 however, got great marks for their time-trials and top marks for their portfolio as well. They were announced as finalists, finishing in the top 10 teams for the day, qualifying for finals held in November. They have the opportunity now to go home, rethink about their design and make their car even quicker, as well as modify their portfolio to get maximum marks.

Both teams should be commended for their enormous efforts in the lead up to the event, and even though one team didn’t make it through they have done an amazing job just to be part of the qualifiers. Students have learnt a lot about 3D printing through problem solving and teamwork, skills essential as 21st century learners.

Also a big thanks for Mr Brennan who helped out for the day and drove the bus. 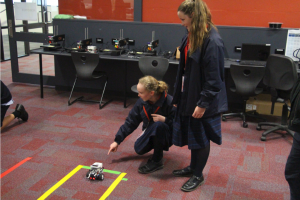 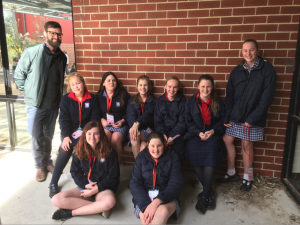