Last week a team of 7/8 students competed at the Warrnambool Debating Eisteddfod. This is an annual event that pits students from around the district against each other, debating a range of topics.

The 7/8 team of speakers and researchers Emily Fuge, Charlotte Braendler, Dan Thomas, Abbey Dixon, Poppy Wakelin and Gemma Blain won their debate, arguing the negative side participation in sporting activities, including contact sports, should be mandatory in every school. Emily was the first speaker, strongly outlining the unnecessary risk of serious injury that would be present if students were forced to play contact sports. Charlotte was the second speaker, stating that the idea of forcing people into sport is an old notion that opens up opportunities for discrimination. Finally, Dan closed out the argument but rebutting the opposing team’s claims and convincingly raised the serious negative social and mental health concerns of those forced into contact sports. Each speaker were expressive and confident in their delivery, earning high praise, and victory, from the expert judge Jeff Keith.

Hearty congratulations must go to the speakers, and also the dedicated support crew Abbey, Gemma and Poppy who also gave up their lunch times for three weeks to prepare arguments for the three speakers. It was an excellent team effort, one that certainly deserved to be rewarded with victory. Well done! 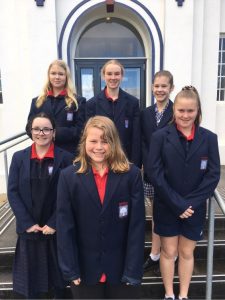